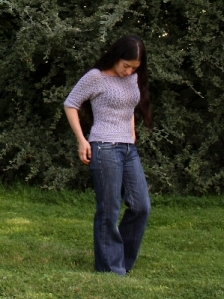 Most of this top was crocheted on various trains throughout summer.
It was finished just in time for an impromptu mid-August weekend in Amsterdam. I scrambled so much to finish this in time for Amsterdam (staying up late at night to do the seaming and weave in the ends), that wherever I wear it, or see it in my closet, I think of it as “the Amsterdam top”, despite the design’s name being Menorca!

The design is from the Summer Crochet book published by Rowan, which I already told you about – this is my second project from this book.
I happened to see the crocheted model (in cream) displayed at John Lewis’s in Oxford Street, only a couple of day after I’d started mine, which was quite motivating.

For the first time, I used the recommended Rowan Siena, which for some odd reason is cheaper here in Southern France than it was in London. I was initially planning on using the white or the ecru shade, but fell in love with the antique mauve shade when I saw it in the shop, and there was no turning back. 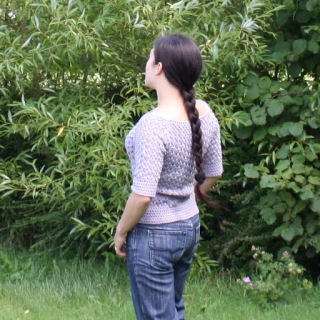 This yarn is amazingly beautiful, and adds so much to the finished work. It was well worth the price (I paid a total of 36 euros for the 8 skeins I needed to make this pullover).

This was rather work intensive, but I do love the puff stitch.

I made a few alterations – mainly, I made the top smaller than the S size, which would have been very loose and bulky on me, and simplified the neckline:

I love that this top both boldly asserts itself as crochet work with its notable puff stitch, while being cute and definitely modern, thanks to the clean cut, the three-quarter sleeves, and the boat neckline. This is definitely my favourite crocheted garment to date, and the one I’ve been wearing most.

24 thoughts on “The Amsterdam Top”